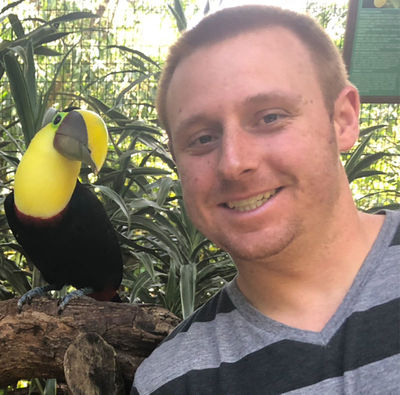 Steven Wolf is currently a Ph.D. candidate in Materials Science and Engineering at the University of California San Diego. He earned his Master’s degree in Materials Science and Engineering from UCSD in 2015 and his Bachelor’s of Science in Chemical Engineering from the University of New Mexico in his hometown of Albuquerque in 2014. Steven has spent the last several years in Andrew Kummel’s group at UCSD covering a wide spectrum of projects. These have included surface cleaning and passivation of compound semiconductors (InGaAs, SiGe) via a downstream plasma source, as well as thin-film deposition of numerous nitrides with hydrazine (SiNx, BN, TaNx, TiNx) and oxides (SiO2, Al2O3, and HfO2) via atomic layer deposition (ALD). More recently, he has studied and achieved selective Co and Ru metal ALD for back-end-of-line processing on metals vs. insulators through the use of novel organometallic precursors. He has performed several in situ and ex situ characterization methods, such as x-ray photoelectron spectroscopy, atomic force microscopy, scanning tunneling microscopy and spectroscopy, and C-V, I-V, and sheet resistance measurements to study the chemical, topological, and electrical properties of these materials. Additionally, Steven has gained valuable vacuum experience that has allowed him to construct several homemade ALD chambers. Recently, Steven was awarded a Dissertation Year Fellowship in addition to a best paper/poster award at the SRC Ascent Review at Notre Dame. Through networking at TechCon Austin in 2017 and 2018, Steven has accepted a future career opportunity with Raytheon!

Fun Fact: When he isn’t working with rocket fuel in the lab, Steven’s interests include outdoor hiking with his dogs and participating in recreational sports!